Black Desert Online offers players the challenge of obtaining a Miniature Elephant, with some impressive Trading ability. With the right skills, this little elephant can speed up trading time, while he’s pulling on your heart strings! 🙂 Adopt your very own adorable mini elephant, today! Miniature Elephant Highlights: Miniature Elephant can only be obtained after completing a Valencia quest line. They can’t be bought or sold at the Horse Market. They can be sold directly to a <Stable Keeper> for about 12 million silver, depending on skills and level. NOTE: Since patch April 17th 2019, “The speed at which miniature elephants run by using ‘Shift’ key without having learned the skill Quick Run and without having equipped a Saddle has been increased by 65%.” Also: “The speed at which camels move in the desert when using the skill Quick Steps has been increased by 40%.”

The Miniature Elephant is slow and more difficult to turn than horses, especially at level 1. Obtaining his equivalent skills to a horse’s Sprint and Instant Accel will make him an excellent trading mount.

At level 1, the Miniature Elephant has a Weight Limit of 830LT. His inventory is quite large at 16 slots. The elephant can go up to a maximum of level 15. His weight increases to 1200LT at Level 15.

Miniature Elephant stats are influenced by RNG. When an Elephant levels, there is a roll to see how much each stat will increase. This probably ranges from 0.1% to 1.3%, like horses. Getting perfect or bad rolls 14 times in a row would be very rare. We can assume the average is probably around 0.6%.

Anyone carrying a trade item, including a Miniature Elephant, will cause Bandits to attack. View their location in the World Map.

Elephant base stats show lower stats than a Tier 1 horse. He’s not built for movement speed and agility, but for trading. Active travel, utilizing the right skills, makes the Elephant speedy, when compared to other trading mounts like wagons. Like the camel, his specialty is traveling over the desert. Great Desert sands do not impede the Elephant, Camel, or Dine. He’ll never beat Dine in a race across the desert, but aren’t Dream Horses a dream? 🙂 For AFK travel and normal movement, the Elephant is not recommended.

Feeding Your Miniature Elephant
Miniature Elephant has a Stamina bar just like horses and will go extremely slow if he reaches 0. He eats any type of Carrot. Special Carrots are good to use with him, as Quick Run can eat up his Stamina fast.

You can also use the Recover option at any <Stable Keeper>.

Leveling Your Miniature Elephant
You level your Elephant up, just like a horse, by riding him on an Auto Loop for about 3 days. Right Click anywhere on your world map and select the “Auto Loop” button. Auto Loop is indicated by a flashing green line.

The Mini Elephant has a maximum Level of 15.

Miniature Elephant has a maximum skill set of 8. There is a roll each time the Elephant levels to determine if a new skill should be learned. So he can potentially have all 8, but I’ve never heard of this happening to anyone. Obtaining any skill is highly RNG, with some players reporting only 1 skill learned at Level 15.

For “potato” Elephants, you can try again by spending 20 million and doing a quest, or purchase Mount Skill Change Coupons in the Pearl Shop.

The table below lists the 8 skills that Miniature Elephants have a chance to learn.

Mount Skill Change Coupon can be used on our Elephants to make them forget one skill. You cannot choose which skill you will get in return. It’s all RNG.

— Quoted from GM Salome —
“Keep in mind that the brand is only increasing the chance that your horse learns the skill, and it’s all random regardless. I know you’ve had higher expectations because you invested Pearls into the brand stone, but the item is sadly not meant to guarantee said effect.

The brand stone however has other uses, which are guaranteed:
– recovery and revival 30% cheaper
– 50% mount gear durability consumption decrease”
Source: horse branding stones

Do Brand Stones Help Gain Skills?
This Pearl item says it increases Skill gain chance, but I see report after report from the breeding community that says they just don’t work. Perhaps they increase how fast a Skill is mastered when you do the Skill mini-game and NOT how many skills a mount obtains?

Elephant gear greatly increases the Elephant’s defense, but also adds additional movement help. Every bit of Turn we can get is good with our wide-turning friends!

The table below lists the Elephant gear that is crafted in a Horse Gear Workshop: Level 3. 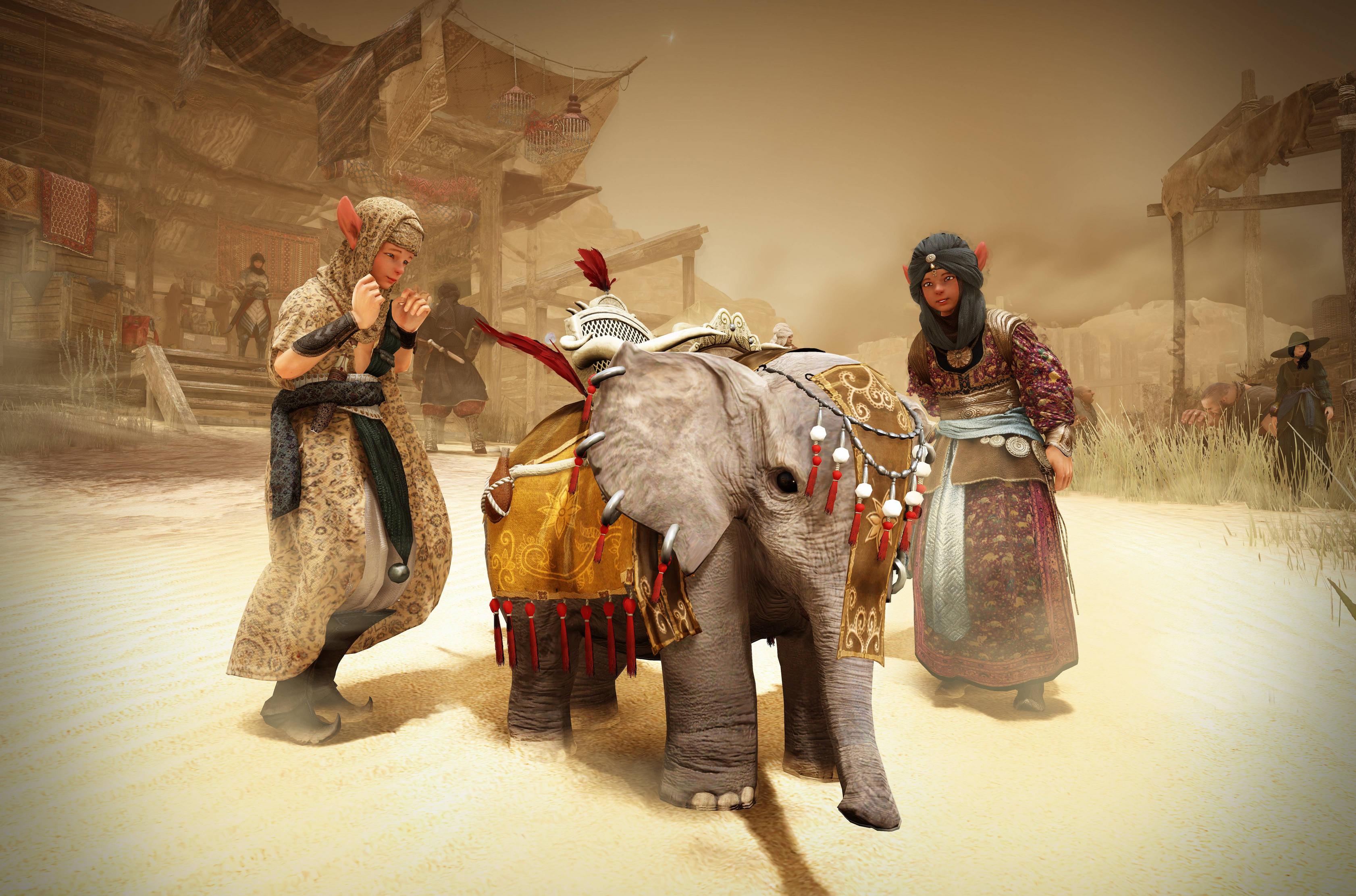 To start the quest line, Speak with Bochlo, the <Stable Keeper> in Sand Grain Bazaar.

You must have 100G Gold Bars for this quest series! Bringing the silver equivalent of 30 million will not work. Visit any <Storage Keeper> and hit the “Currency Exchange” button. Buy 3x 100G gold bars for 30 million silver.

The Villa Keeper, Dumaham, will sell you a 7 day Shakatu Villa Invitation. He is located just outside the Shakatu’s Villa entrance.

Rent Shakatu’s Villa for 10 million silver, then go inside the villa and speak to Serazad.

Quest Description:
The Sand Grain Bazaar Stable Keeper, Bochlo, recommended you to purchase a miniature elephant in order to start trading in the desert.

A miniature elephant can carry a heavier load than a camel, making it an ideal mount for desert trade. Since it is rare and difficult to acquire, Bochlo suggested you to go to Shakatu’s Villa to look for a miniature elephant.

After you get in the villa, go talk to Serazad.

Serazad will have you go to Shakatu and speak to Shakatu <Boss>. You will need to give Shakatu <Boss> 100G bar x3 for an elephant permit. After you pay him, go back to Serazad at Shakatu’s Villa.

Make sure you bring 20 Empty Bottles back to the villa.

Draw 20 bottles of river water. You can do it there at the fountain in Shakatu’s Villa. Give the water to the elephant outside the Villa, then speak to Serazad.

Gather 100 weeds and give them to the elephant outside the Villa. Speak to Serazad.

Shakatu Farm is the perfect place to gather weeds. It’s close by, just NW of Shakatu and East of the Villa. There are crops of Star Anise and Date Palm all bunched together for super fast gathering. Shakatu Farmland Location Map.

TIP: Use barehanded gathering to increase your chances of getting weeds.

5. Owner of a Special Elephant

Congratulations! You are now the proud owner of a baby elephant!

You may want to try for a another Elephant, after you have leveled your Elephant and it didn’t get the best skills.

Speak with Shakatu <Boss> and pick up the quest: [Miniature Elephant] Permit from the Merchant League.

He will randomly give you 1 of 4 quests:

NOTE: After obtaining all the seals, you will also need 2x 100G bars (20 million silver)

Shakatu <Boss> will give you a

You will need a Large fence as the haystack takes up 10 grids. Expect the growth rate to be long, between 20-30 hours.

After the Haystack is at 100% growth, you harvest it and get another Mini Elephant Emblem. You take this to any <Stable Keeper> for registration.

The best quest you can possibly get is the Gahaz Bandits one. If you get a quest you don’t like, you can wait until server reset for a new one.

You also have the option of repeating the Miniature Elephant initial quest line for another 40 million silver on an Alt. (30 if you already have Shakatu’s Invitation.) This option is more expense and you have to do the gathering quests again. But when compared to 20 Trading quests, you might think it worth the expense.

1. Take your horse to a <Trade Manager> and purchase any trade item. Put the trade item in the horse’s inventory.

This is where Level 50 to 55 thieves will spawn and attack you, if you have a trade item.

What is Active Trading by Eminent

Active Trading refers to bringing trade packs along a route on a wagon or elephant. The benefit to active trade is that the only investment that needs to be made is the cp to connect the cities you’re trading between. In fact, you’ll actually earn a fair amount throughout the process if you choose wagon trading over elephant trading…

Trading with an Elephant
Elephants require a 40 million silver investment, and possibly some Pearls on skill reset coupons (because you need specific skills for the elephant to be good). That said, elephant trade is very fast Trading Skill XP which rivals rolling, and the elephant itself may be useful for other things in the future depending on your play style. Elephant trade is 100% active.

After you get your trading elephant, you need to level it to 15 (just autopath it for like 3 days), and it needs to learn the skills “Quick Run” and “Joyride”. Without these skills, your elephant is useless and a wagon would be better.

One important thing to consider is effort. Trading with an elephant is significantly faster than using a wagon, but it’s completely active (unlike wagoning). If you’re going to be 100% active anyways, it would be much better to just do container trade than elephant.

Trading with Wagons
On the other hand, wagons require less of an investment and have the benefit of being semi-afk. While your wagon auto-paths between cities you have a few minutes of downtime to read a book or watch your favorite show. The downside to this is that it is less xp than elephant. However, wagon trade will bring in more profit than with an elephant because you can train horses in the meantime (see the training section to learn how to maximize your profits when training horses).

If you’re using a wagon, you should be using a Merchant Wagon (easy to buy from the market). If you’re going to put gear on it then use merchant wagon gear. You only need to get weight limit on your wagon for the heaviest inventory that you’re transporting (aka, look at the weight of the trade goods on your route, calculate how much it weighs… if you can carry it without gear then don’t waste your money).

Also note that there is p2w wagon gear that adds weight and speed.

I personally avoid wagon gear simply because it degrades. The time spent having to go repair makes the already negligible buff to your xp (4% speed) even less. If you aren’t lazy like I am, then I won’t discourage you from using wagon gear, it just wouldn’t be my choice.

For active trade you generally fill up your mount’s weight/inventory (whichever comes first), go to the next point in the route, sell out your goods, buy out the new goods, and repeat. Once you have completed the route, you’ll generally want to hop servers so that the trade goods reset.

This first trade route, created by Yuma, is meant for Beginner to Apprentice levels for early Trading Skill XP. The route goes in the following path:

Make sure to have all of those nodes connected in order to get full value for your trade goods.

Let’s look at the individual trade goods for this trade route: