Let’s dive into this new and wonderful world of BDO Underwater!

The main benefit of grinding in the Underwater Ruins is the chance to obtain a best in slot ring, Tungrad Ring.

The Tungrad Ring beats the old BIS, Ring of Crescent Guardian by 1 AP. It also gives +10% to Black Spirit’s Rage.

Protty Cave drops the Rainbow Coral Ring and a shard that can be used to help create a Tungrad Ring. Sycraia Ruins drops the Tungrad Rings and both shards to craft one.

Make sure all quests are turned on in your quest window! O key.

The quest chain shown below will give you one piece to create a Tungrad Ring and a key to enter the higher difficulty grinding area of Sycraia Ruins: Abyssal Zone.

Line up Black and Red Shard to create a Tungrad Ring.

Kama I starts with Kamasylvia, the Land Behind the Veil given by Black Spirit at level 58.

– The Origin of the Rumors

– Island of the Abyss

– Those Who Haven’t Returned

– Rift on the Ocean Floor

– Faith Beneath the Ocean

– Wind on the Ocean Floor

– Sealed Memories of the Deep Sea – a key used on Sealed Device to open locked area.

– Eyes of the Deep Sea

– Purpose of the Shrine

– The God of the Protties

Start two daily quest chains after every server reset. Several of the quests can be picked up and done at the same time. Some are chained. Find Dustin, the <Blacksmith> on Weita Island, and Lynelman, the <Blacksmith> inside Sycraia Upper Zone.

– [Daily] Preparations for an Escape I

– [Daily] Origin of the Eerie Sound

The Underwater Daily quest series requires you to complete the main quest line leading up to and including all of the Calpheon story. Press O key then Main tab.

For my archer, Calpheon main story includes “Disappearance of Nella” and “The Qualities of a God”

Older characters, before the quest reworks, will see “Beginning of a Journey”, showing 193 total quests.

It is a winding cave system with many levels.

There are NPCs located just inside to repair armor, sell, and buy potions.

The game’s recommended AP for Protty Cave is 170. However, this is more like a minimum recommendation. You may get frustrated grinding here at that AP level because the mobs will not die in one hit.

Characters can come here lower than levels 59 and 60, especially if they have high gear scores.

Protty Cave is the only location where you can grind for a Rainbow Coral Ring. The monsters here also give Ancient Seal – Red Shard. You will have to grind in Sycraia to obtain the other half, the Black Shard. 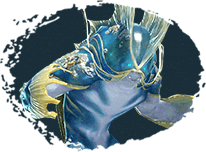 Protty Cave is located on Weita island, which is north of Velia.

The best way to get here is via your own boat on a tagged Alt. Taking your Tagged Alt and switching to your Tagged main character once you get there, will protect your boat from being attacked by PVP players. BDO was patched so that unattended boats can’t be destroyed by other players. Boats also have to have at least 1 passenger that is level 50+ in order to be attacked by others.

There is a ferry and griffon that will take you to Iliya Island, but it is quite a distance from there to Weita Island, especially if you are swimming. For more info about the ferry/griffon to Iliya read below.

▲ Look for the entrance on Weita Island shown here.

Sycraia Underwater Ruins is deep underwater and protected by a semi-invisible dome barrier. The trick is finding one of four entrances through the barrier and into the grinding area.

The center of the grinding area has a huge circular stone structure that is easy to spot from far away.

Once you swim through one of four stone entrances, you immediately stop swimming and can breathe and fight normally.

Sycraia Underwater Ruins is the only location where you can grind for the pieces required to summon the field boss, Sycrid. It also drops Tungrad Ring and the Black/Red Shards used to create a Tungrad Ring.

The game’s recommended AP for Sycraia Underwater Ruins is 230. However, this is a low recommendation. You may get frustrated grinding here at that AP level because the mobs will die more slowly.

I recommend you get as many seconds of Underwater Breathing as you can, especially if you are new to the area and don’t know what to look for.

NOTE: Underwater Breathing gear isn’t necessary, if you own a Splat Fisher’s Costume or Da-Dum Da-Dum Diving Costume. Both are purchased for 2200 Pearls in the Pearl Shop.

Sycraia Underwater Ruins is not easy to get to. It is located north of Iliya Island and east of Racid Island. You can use your own boat and sail directly over the ruins to the icon on the map. Be sure to sail there on a Tagged character Alt.

There is also a ferry that travels to Iliya Island, which would allow you a relaxing boat ride while you fish.

There is a faster NPC option of using a griffon from Velia to Iliya Island. The views are wonderful! It’s a 3 minute flight.

If you don’t want to take a boat, you can travel there via griffon.

There is an NPC who gives a swimming buff and a Marni Stone Vendor on the Northern beach of Iliya Island. The swimming buff lasts for 5 minutes, which is just long enough to get you to the underwater ruins, without a shark or fish Pearl Costume.

It’s not very obvious where you should stop your boat. The icon on the World Map will give you a general idea of where Sycraia Ruins is located, but once you dive into the water, any distances can be challenging.

The Ruins will look so close to you, but as you’ll soon discover, distance and time are hard to judge in the water and you’ll have to swim quite a while.

Glub… Glub… Glub….
This is what it looks like when you aren’t prepared…

My first few attempts at finding any entrance were met with no success. At one point, I was so close to reaching the gate to the entrance, but ran out of Breath too soon. My Stamina was almost non-existent.

The water has this blue blurry haze over everything. If you know how to remove this, please let me know.

After some squinting, you should see the central ruins structure. This is at the heart of the grinding area, but you can’t reach it because of a mostly invisible barrier above it. If you swim directly to this, you will run out of air and have to turn back to the surface.

Note that the stone gateway closest to the central main ruins structure is NOT a gateway to gain entrance and is inside the grinding area just for looks. Phttt!

Sycraia Underwater Ruins Gateway
Things only clear up after you swim down for a couple minutes.

Make sure you are right above an entrance, before you press Q to dive straight down. This isn’t so critical if you have a Pearl fish/shark costume.

This is a very tough grinding zone with densely packed mobs. Bring friends!

If you die, you are put on Racid Island. You loose your access back to the Abyssal Zone and will have to get another key to enter.

The game recommends 270 AP with 310 DP for Abyssal Zone. However, this is a low recommendation. You may get frustrated grinding here at that AP and DP because the mobs are very difficult.

Traces of the Ancient Seal

RNG one of the following:

Ancient Creature’s Scale and arrange in a shape of [+] to make a Form of an Ancient Creature. This lasts 7 days and starts a quest, Sealing the Sycraia Underwater Ruins (Weekly) that requires you to use the Ancient Seal in the middle of Sycraia Ruins (Upper Zone). Can be completed once a week.

After you use the Ancient Seal, there will be a server message. After about 20 minutes, Sycrid will spawn inside Sycraia Ruins (Upper Zone). Sycrid will despawn after 10 minutes.

Sycrid has a channel cool down of 6 hours. After anyone uses the Ancient Seal, it will disappear when Sycrid is summoned, and reappears after 6 hours.

If the Ancient Seal isn’t present, switch to another server or wait until it reappears.

You may receive a penalty if you die while fighting Sycrid or Sycrak.

Wacky Toshi sells Marni Stones that you can exchange to him for Combat Exp. The stones require a certain amount of monster kills for mobs in Sycraia Ruins and Protty Cave.

You can use the NPC search button to locate Wacky Toshi, after speaking to him.

Are Marni Stones Worth It?
Marni Stones are easy and really help for faster leveling. I think they are well worth the price. They do take up pack space, especially if you choose the higher Exp, 250 stones.

Exp Per Marni Stone?
Marni Stones give a set amount of Combat Exp, which changes depending upon your level. The stone Tier and grind location also affect how much exp each stone gives. Tier 2 Stones give more Exp, but give less exp when compared to 2x Tier 1 stones.

NOTE: Patch notes say you get “120% to 160% of Combat Exp for defeating monsters excluding Combat Exp Boost can be given”. I’m not sure how accurate this is since some players claim much less %.

There is underwater gear in BDO that will help you reach Sycraia Ruins by improving Underwater Breathing and Movement Speed. You can’t reach the ruins without at least +45 seconds Underwater Breathing. (I was unable to reach the Entrance with +30 seconds and 0 Movement Speed ranks.) Get as much as you can, but at least +45 seconds. Even with this much, you will need to position yourself directly above an entrance, before diving straight down with Q key.

Your Fairy Laila has an RNG chance to obtain up to +30 seconds of Underwater Breathing. The Level of skill depends upon her Tier. Only Tier 4 Radiant Fairy can obtain the highest levels of 4 or 5 in Tingling Breath. A Tier 3 Fairy can only learn up to Level 3 of the skill, etc. There are costume sets in the Pearl Shop that offer +149% Swimming Speed buff.

Da-Dum Da-Dum Diving Suit Set is the only Pearl Costume that provides +30 seconds to Underwater Breathing.

Somehow, I frequently find myself stuck underneath a pier or my own boat, while swimming! Do you have the same troubles? Remember that there are key presses to swim up or down.

TIP: When you use the Q key you dive straight down. If you need more of a diagonal downward direction, then you must use your W key and angle the camera so that you are looking down. Q+W will not work.

Stamina regenerates at 1 every 3 seconds while you are in the Recovering State (F key). If you run yourself out of Stamina, expect a 5 minute wait as you recharge in water. Land recharge is very fast. The only thing that can help with Stamina, is increasing your Max Stamina with gear or wearing a shark/fish Pearl Costume. There is no item that will speed up regeneration.

You can log to character select and back to recover 100% of your breath bar, just be sure to press Q as soon as possible so you don’t auto swim to the surface too much.

Or, if you are taking a tagged character, have the character not grinding drive the boat/swim, and tag when they are close to running out of breath.

Instead of swimming around looking for the entrance to Sycraia, when your mini map shows ‘Sycraia Underwater Zone’ you can simply Escape-Escape and it will take you to the blacksmith/vendor in the upper zone.