Marni’s Realm is a select group of private grinding spots limited to one hour each day. Enter Marni’s Realm by visiting a specific grinding location in which the Marni’s Realm entrance button appears.

Marni’s Realm makes it possible to have a grinding spot all to yourself. You will not have to PVP or DFS for some of the best grinding locations in BDO.

Marni’s Realm is available for the following monster zones:

To see a list of grinding spots eligible for Marni’s Realm: 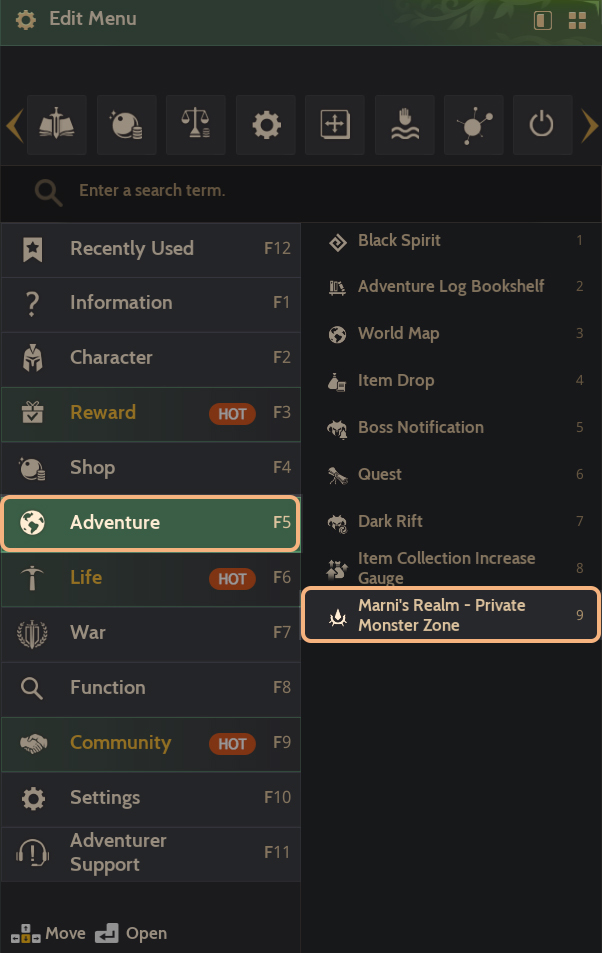 Click the navigation button to draw a path to the correct location.

You can enter Marni’s Realm, after you arrive at the correct spot. 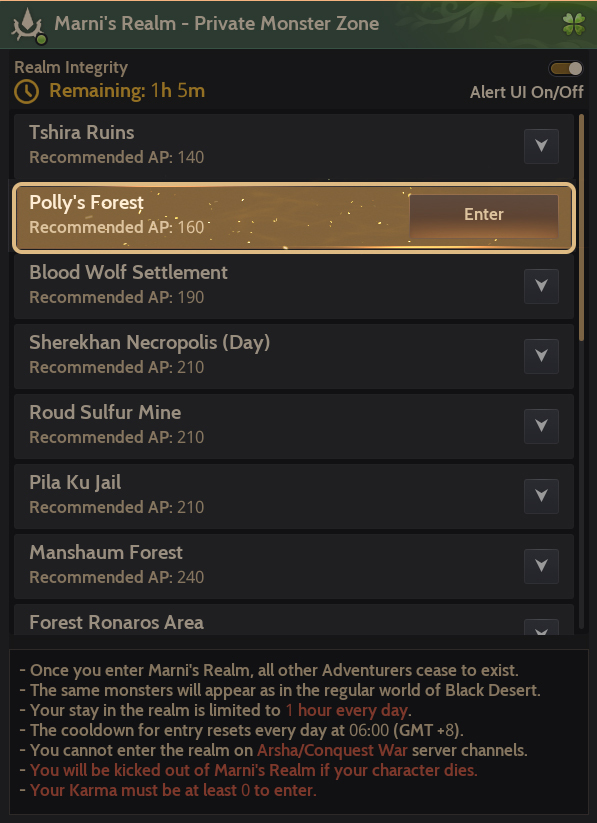 If you have used up the full 60 minutes, you will be teleported out of Marni’s Realm.

To exit Marni’s Realm early and pause the timer, Click the EXIT button. Once you leave the realm, the timer will pause and only resume again after you reenter

There is a 5 minute cool down before being able to reenter Marni’s Realm after leaving it.

Pila Ku is one of the trickier locations to find.

Marni’s Realm for Pila Ku is located near NPC Botadin, from the plaza entrance. 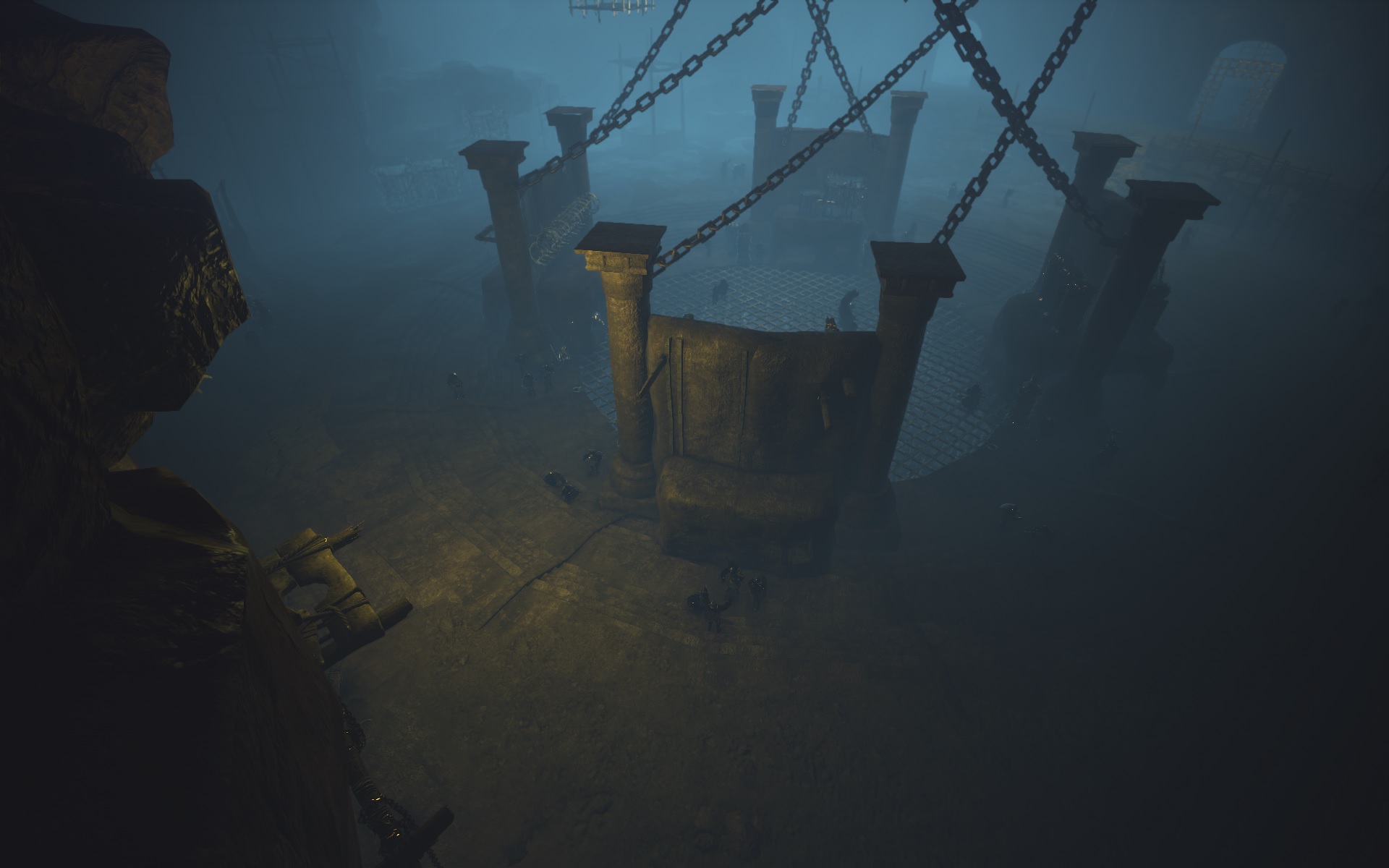 Patch Notes copied below from https://www.naeu.playblackdesert.com/en-US/News/Detail?groupContentNo=3183

We’re adding Marni’s Realm (private monster zones) as we revealed during CalpheON Episode 2. The concept of private monster zones came to fruition after we thought about how to improve the gameplay experience for our Adventurers who had limited time to play each day. We first brought this concept to life in the form of a “mini” server, but we felt that version was difficult to balance and didn’t offer an equal opportunity access for all Adventurers. Hence we’ve come to develop and reveal Marni’s Realm – Private Monster Zones. Of course, up until we settled on this current iteration, we went over countless feedback and opinions from our Adventurers, which helped us immensely. We’re just happy to be able to finally reveal the fruits of our labor.   Marni’s Realm does not apply to all monster zones, and we also focused on most popular zones sought after by our Adventurers, such as those in the Elvia Realm, Sycraia Underwater Ruins, and Gyfin Rhasia Temple.

It’s quite simple to use. You will need to first move to the designated spot in a monster zone, open up the special menu and click a button to enter. Please note that we limited Marni’s Realm to certain parts of a monster zone in order to lessen the burden on each server. For example, upon entering Marni’s Realm at the Orc Camp, you’ll find yourself only able to move around and fight monsters in the “best spot” of the monster zone. Since you will be the only Adventurer in said realm, we didn’t feel the need to open up the entire monster zone for Marni’s Realm.   Also, your usage of Marni’s Realm is limited to 1 hour per day.

While we heard your initial feedback on 1 hour being somewhat short, we didn’t want Marni’s Realm to end up overshadowing the main content of Black Desert, that is, fighting monsters in the open world alongside other Adventurers. Therefore, we have no plans to increase the daily limit at this time.

Where is the blood wolves spot? I can’t find the correct spot to activate.

Hello 🙂 Press Menu (ESC) → Adventure (F5) → Marni’s Realm Private Monster Zone and then find and click the navigation arrow to draw a path to the zone you are looking for. Follow it to the end. Have fun!