Farmers rejoice! A cute and adorable mole pet is just what we needed! 🙂

Pit-A-Pat Mole is a special pet obtained via the Farming Life Skill.

Will he find my lost sweet potato?

I saw the mole event and took some screens. I didn’t get petals or actually see the mole above ground to get an image of him!

This notice of Pit-A-Pat-Mole occured right after a spawn of Giant Mole and looting him.

One of three “holes” that appeared after the notice.

Watch carefully for the Pit-A-Pat Mole to emerge from the ground, after walking to the hole.

A beam of light will appear before the mole emerges from the ground.

The mole will walk off, then stop and dive back into the ground.

Patch 1-18-23 state “The [Playful] Pit-A-Pat Mole, which spawns at a low probability while Farming, will now dig in place instead of attempting to run far, far away.

Pit A Pat Mole will leave behind a glowing loot object on the ground that you interact with.

The image was shared in the Life Skill Discord by Ezrea#4356. Thanks Ezrea! 🙂

Other Rare Mole Spawns from Farming

● According to the tales of farmers, there are rumors abound of some mole with a rather peculiar appearance. Farmers have named this mole the ‘Pit-A-Pat Mole.’

– When the Giant Mole appears while farming, there will be a very low chance for several holes in the dirt to appear.

– The rather peculiar-looking mole will create a bunch of holes, and will only appear from one of these holes.

– This special mole will drop a ‘Pit-A-Pat Petal’ when you chase it away, and you will need to bring 10 petals to Jemkas Wyrmsbane at Northern Guard Camp to accept the quest ‘Trace of Pit-A-Pat Mole.’ Upon completion, you will be awarded the ‘Pit-A-Pat Mole’ pet.

– Also, this special mole is even greedier than the Giant Mole, as it will drop many more farming materials when you chase it away.

– The Pit-A-Pat Mole pet’s special skill is finding resources, and its talent is increased Life EXP. 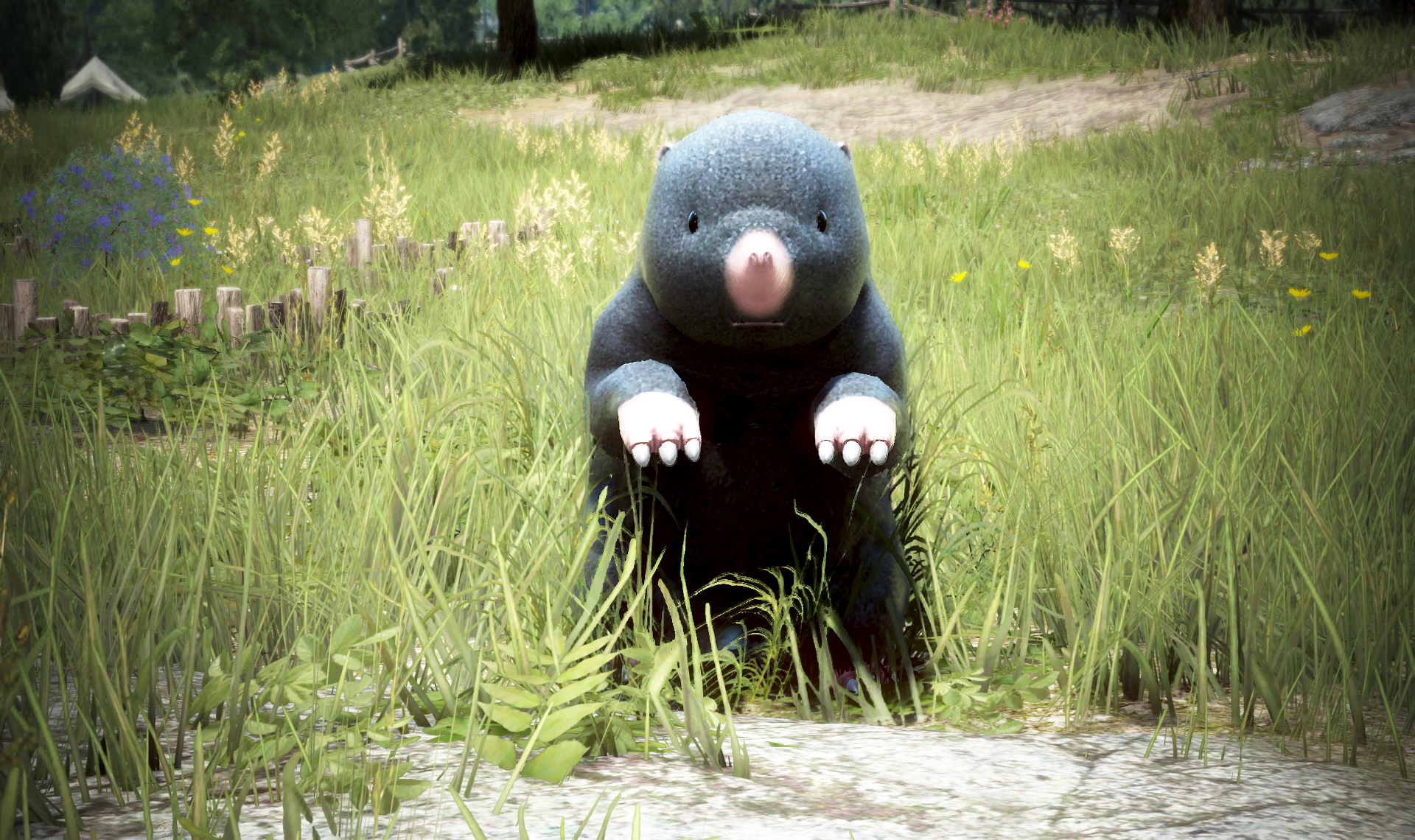 the Pit-A-Pat mole just appeared for me for the first time ever, I came right as he fleed to check out more info and I found out he never left loot for me to collect so I guess I’m missing my first Petal for the mole pet, dang!

Congrats on spotting him! Now you know what to look for next time. 🙂 He’s quick!

I have one of the 6 pit-a-pat moles in eu / na apparently, but it’s a pet you can exchange only with itself and ive yet to discover anything special about it 🙂 it has a hat on it’s bum though

LOL! Well that sounds special. Congratulations on finally getting him! 🙂 You must be a farming aficionado!

Hi, GrumpyG I would like to know if the mole is only 1-time thing? that after claiming once, we won’t be able to get anymore petals to exchange 2nd mole that is required to exchange or upgrade the 1st mole ? thanks in advance

Hello 🙂 That’s a good question! I don’t remember seeing it as limited to one per family anywhere. Also, when you search on codex, the category of the exchange quest is listed as “Repeat”. So it looks like it can be repeated, but I can’t confirm since I haven’t obtained one yet. Have fun! Reference Quest: https://bdocodex.com/us/quest/2061/1/

You can get additional moles. I have gotten 2 moles (20 petals). Still waiting on 1st petal towards 3rd mole. I follow Salt’s youtube farming guide, but I fertilize (organic), use workers to tend farms, and breed Magical Delvinia Alrea in the cliff area west of Velia on Old Moon fences and Klau’s Old Moon fence. Level has nothing to do with it. I got my first Mole while Master 7, got 2nd at Master 13. I tend to breed plants 4-5 times per day, 6 or 7 some days with few days off. I tend to get about 1… Read more »

Thanks for the detailed info! Grats on the mole. He’s a cute critter. 🙂

Hi…is the Pit-A-Pat mole a guarantee spawn after killing a giant mole? Because it didn’t spawn after the last two giant moles that I killed. (i have 4 pedals aready btw)..just want to know of its a bug or RNG

Hello there 🙂 Grats on the 4 petals!! According to patch notes, “When the Giant Mole appears while farming, there will be a very low chance for several holes in the dirt to appear…” Looks like it’s RNG for giant moles only. Good luck!