This BDO AP Brackets Guide takes a look at the AP buffs obtained for different levels of AP. DP Brackets are like AP Brackets, but give a Damage Reduction bonus instead. AP and DP bonuses have been part of Black Desert Online for a long time, even before Renown was added and then later removed. 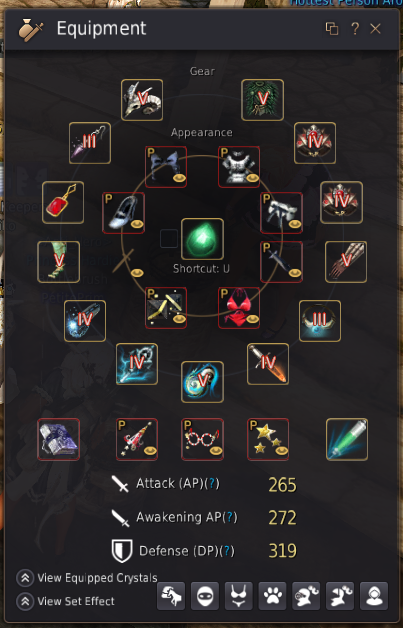 AP Brackets Vary Widely:
You reach your first AP Bracket at 100 AP, when you receive 5 extra AP. The next AP bracket is at 140, when you get another 5 AP. This pattern does not last long. You gain anywhere from 4 to 21 AP by reaching other AP Brackets. The biggest jump is at 265, when you get 21 bonus AP. After 269 AP, you start getting diminishing returns. The next bonus after 269 (273) only gives 5 AP.

Do AP Brackets Really Matter?
21 additional AP can give a huge advantage in PVP. This can make a big difference with classes that typically struggle before reaching their AP brackets. It can help you kill other players even without CC for some classes. (Dark Knight, Berserker)

DP Brackets?
AP Brackets usually get all the attention, but DP Brackets are important as well if and when you do get hit. In our example gear image showing 265 AP, we see they also have 319 DP. That means they would get a Damage Reduction of 16%! This is one PVP opponent, I wouldn’t want to tango with if I were at substantially lower AP and DP Brackets.

We’ve carried out improvements in all our classes. It’s a special occasion for us as the update is based on the opinions of adventurers who participated in our focus group testing and we’d like to take this opportunity to express our thanks to them. Many of the ideas were deliberated in-depth and extensively among our staff to ensure that the following changes would contribute to the overall balance of the game.

Today’s updates focus on improving each class, especially their performance of certain skills. In order to compensate for the decreasing DP efficiency since the release of Succession, we’ve revised the Damage Reduction Rate effect per DP range. However, the difficulty of some monster zones may drop too sharply due to this so this change may be subject to adjustments. The Extra AP effect per AP range has also been raised slightly to go with the new rise in defense efficiency. Furthermore, the base AP of summoned creatures has been set to 100 since the summoner’s Extra AP did not apply to their damage, making them relatively weaker compared to the summoner as they progress in the game. Lastly, to players who are interested in news regarding Awakening related damages, we plan to closely observe the new increases in defense efficiency and further adjust the Awakening skills’ damage based on the collected data after the update. There are still so many suggestions from the players that we haven’t entirely worked out yet but we plan to present them through the Global Lab as soon as we develop them.

The AP of the basic attacks for the following classes that are considered relatively low have been increased to the following:

so l dont get it, the stats shown in the equipment picture are with or without the bonuses applied?and how those numbers translate to the zones where the suggested AP/DP are shown on the world map?

Not much, take world map numbers and think of it as your base ap + tet kut

It depends the class too, so try to see some videos before or try yourself in the spots, explore the BDO map and some times challenge myself without care about money is really nice

anybody know how work Extra AP Against Monsters?

Hey man, i am from BR so sorry for my inglish, but works like the normal hidden ap, but it will be just aplied to monsters, so in players for example it will not be aplied so is sugested to grind and pve, but is nice to notice that the main source ap against monster is the kutum, off hand wepom, and it hass a lot of dp stat and evasion, so I use it for pvp too. The other main sourrce of ap against monster is the main wepom(suscecion, like kzark wepom) and the black star wepom both normal… Read more »

man, u can make ton of Bs weapon stones by node like stars end and 2 other node so u can get 10 per day by nodes. search for it