BDO Gamepad & Controller Love!!
(Ready to vanquish with the press of a mighty red B button? ☺)

In Black Desert Online, combat is one part of the game, many of us love. We can dive into a hoard of baddies and watch them fall en masse! Most BDO gaming is done via mouse and keyboard on PC.

But those combos can get brutal on our fingers and you may be wondering about the widsom of using a gamepad or controller in BDO.

Using a controller on PC can be a bit frustrating, but I think it’s worth it. The most frustrating part is not being able to turn with a look. When I play with my mouse, I can angle the camera quickly and shoot the next mob. Not so with a controller. Strafe right and strafe left are all you can do with your left joystick. What I need is move camera left or right for actual movement and aiming purposes on an archer. Move camera left and move camera right is accomplished with the right joystick, which takes some practice to get used to.

IMHO controllers are great for a break from the traditional play style and are allot of fun to experiment with, but I wouldn’t use them during intense battles like PVP. They do have their perks, but also a few drawbacks to keep in mind.

Important Factors When Choosing the Best Gamepad or Controller:

When you use a controller for BDO, you are provided a default setup and Hotkey assignment. The Hotkeys set certain BDO actions to specific buttons on your controller. You may find the developer’s Hotkey layout not to your liking. But it’s very easy to change Hotkeys inside the BDO Settings interface. 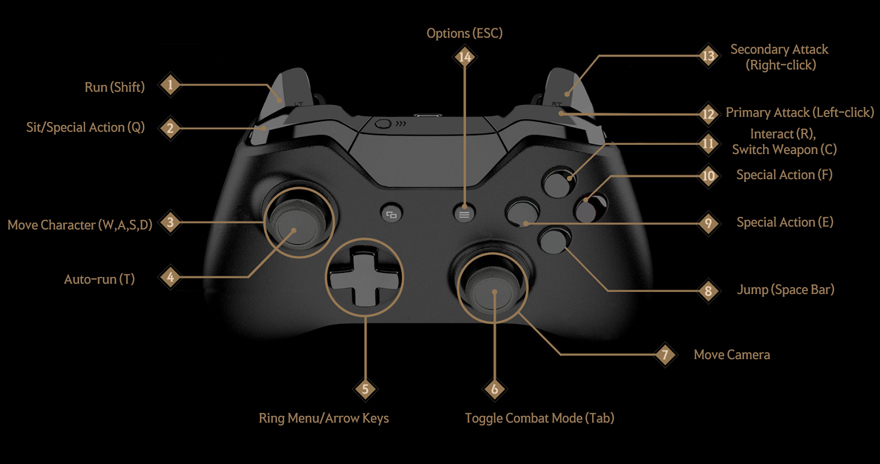 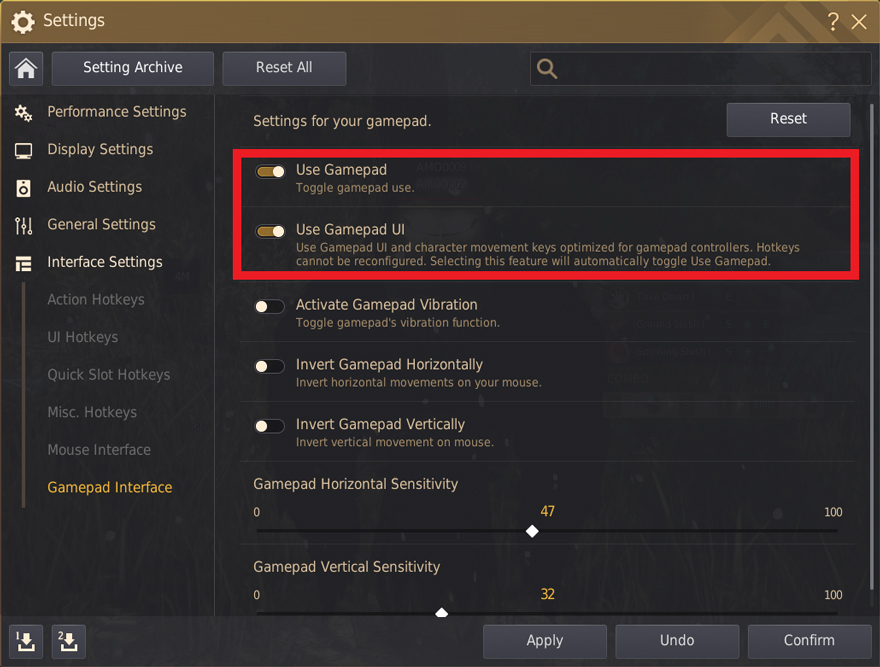 BDO Controller Hotkeys: Action Hotkeys
The “Action Hotkeys” tab in the “Interface Settings” section is responsible for character movement and repetitive actions like Jump, Sprint, Evade, and common interactions in the environment. Most of them are easy to understand, but I will go over a few that might cause confusion.

If any of the other options confuse, just click on the “Keyboard” select option and you can view the corresponding keyboard Hotkey.

BDO Controller Hotkeys: UI Hotkeys
The “UI Hotkeys” tab in the “Interface Settings” section is responsible for User Interface controls like Inventory, World Map, and Show/Hide Cursor. These will probably not be used too often as you are playing, so you might want to save these for the more complex Hotkey combos.

BDO Controller Hotkeys: Quick Slot Hotkeys
The “Quick Slot Hotkeys” tab in the “Interface Settings” section is responsible for pressing Quick Slots that are normally number keys of 0 through 9 on the keyboard. Default location of Quick Slot is visible on the bottom of the player’s main window. This is a good time to check and make sure you have something quick slotted to regenerate health, mana, etc.

The Quick Slots can be used for your main combat moves, however, I don’t recommend this, unless you need simple button presses. When you use the Quick Slots, it can make playing BDO with a controller somewhat limiting, as some skills are unable to be put into Quick Slot. Also, using Quick Slots actually increases the cost to use the skill. There are a maximum of 20 Quick Slots.

BDO Controller Hotkeys: Misc Hotkeys
The “Misc Hotkeys” tab in the “Interface Settings” section is responsible for different User Interface actions like camera position. You have no choice, but to leave the camera movement (looking left and right) up to the Right analog joystick. The camera options here are for the fixed camera position of the aiming reticule over your character. 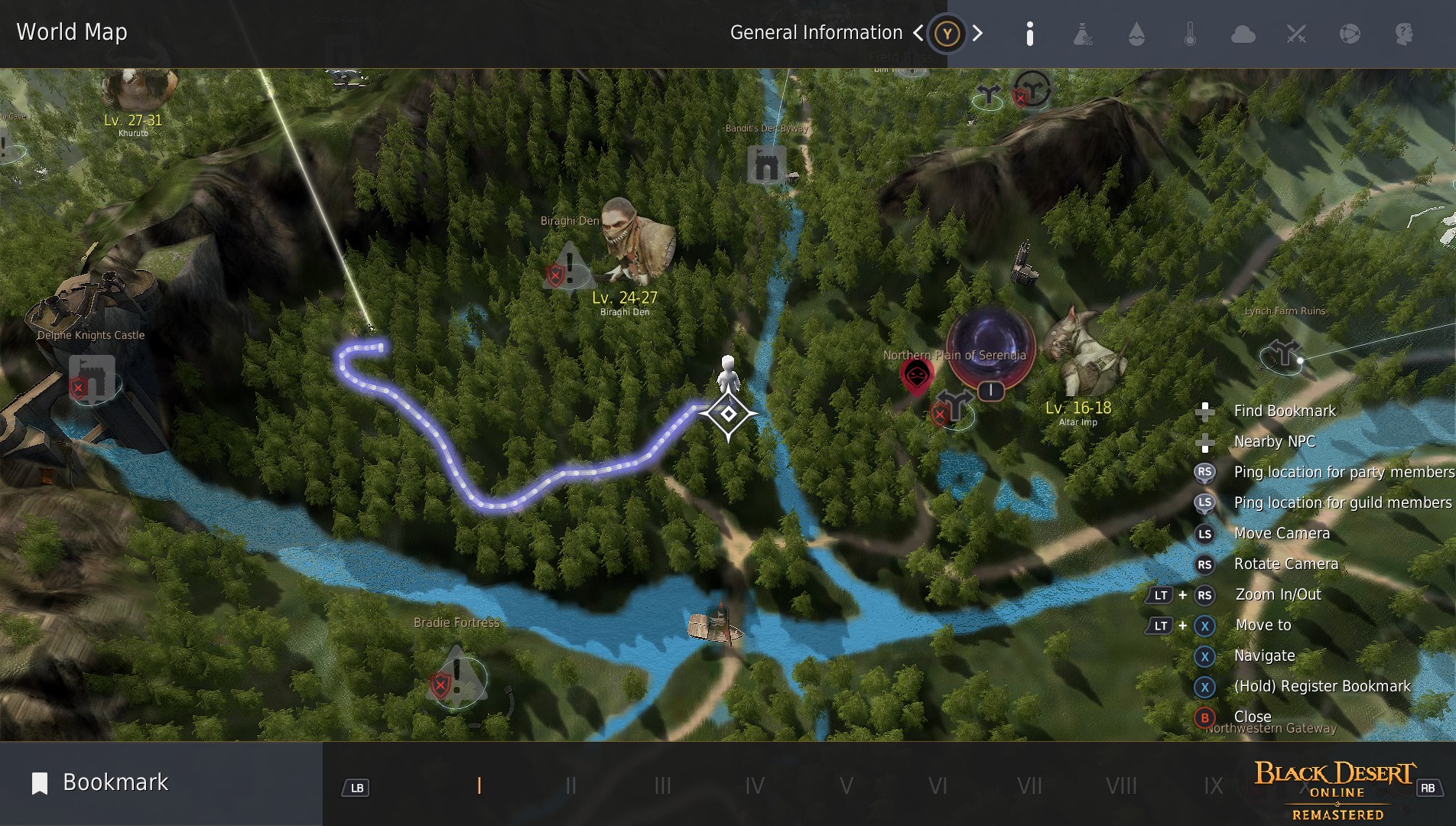 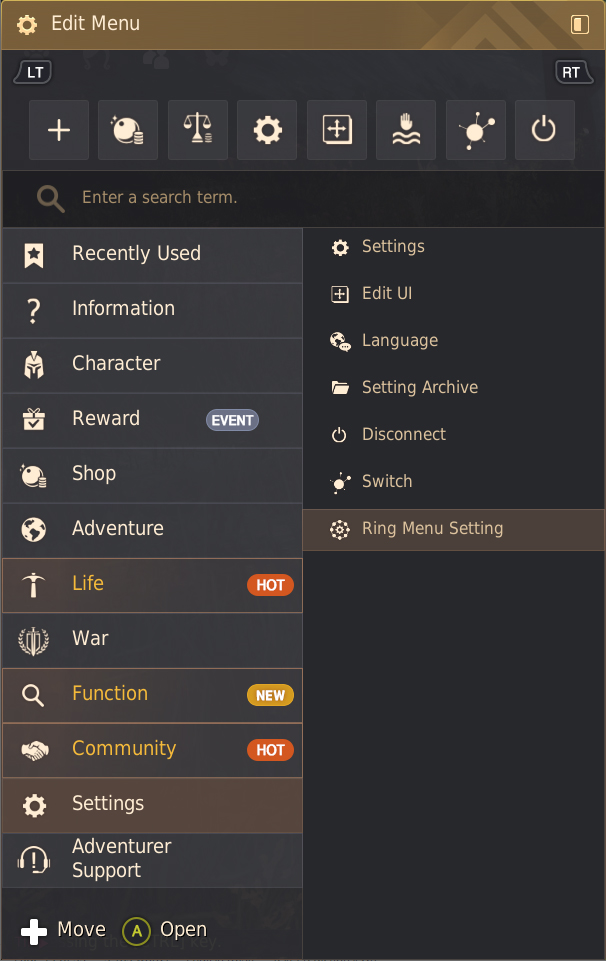 Using the Gamepad UI allows you to activate and edit the “Ring Menu,” which is a feature that gives you quick and easy access to frequently used functions. From the Ring Menu Setting, you can change the default Ring Menu settings or set any of the empty Ring Menu slots to use potions, items, enhanced skills, social actions, etc. 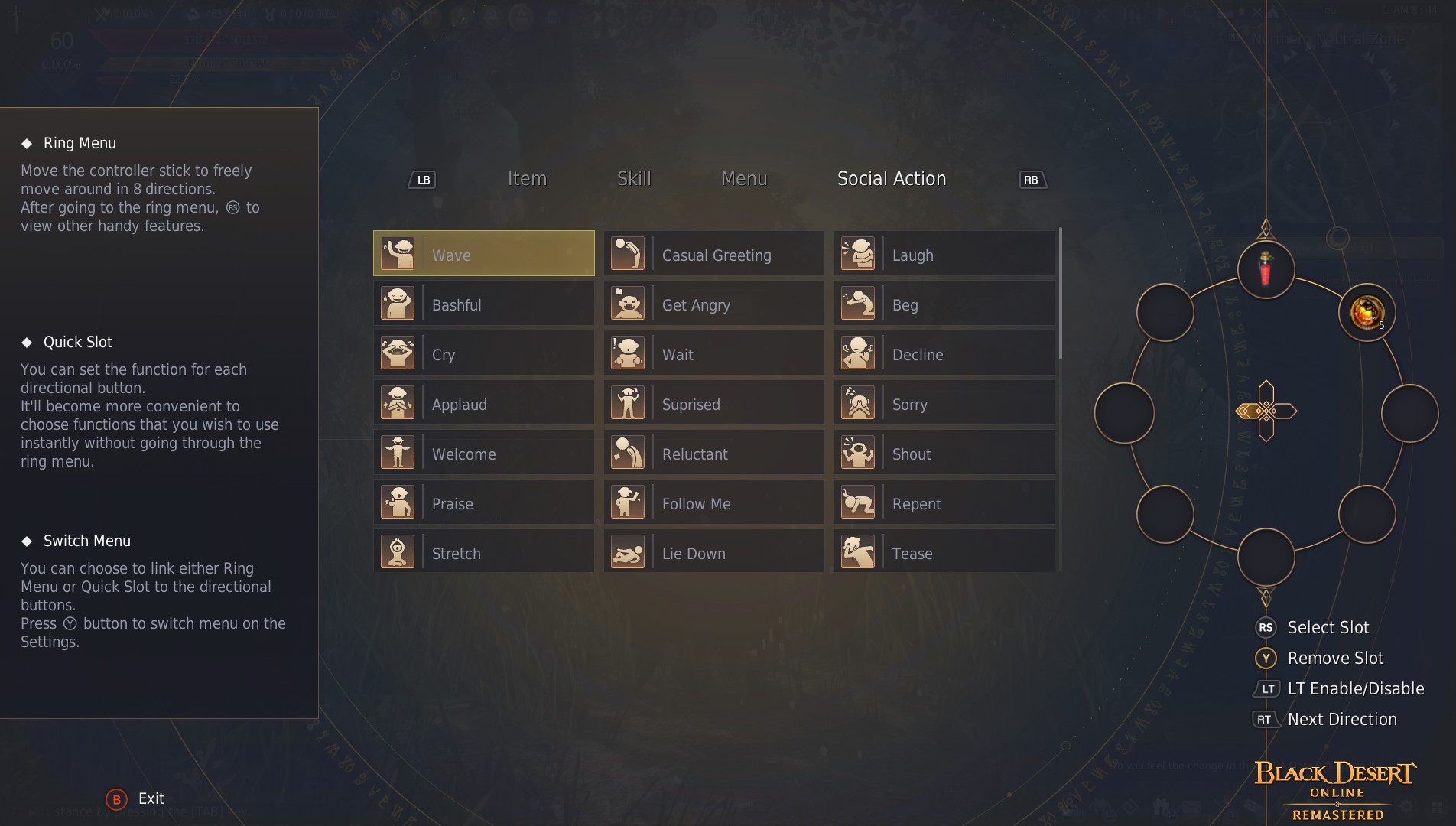 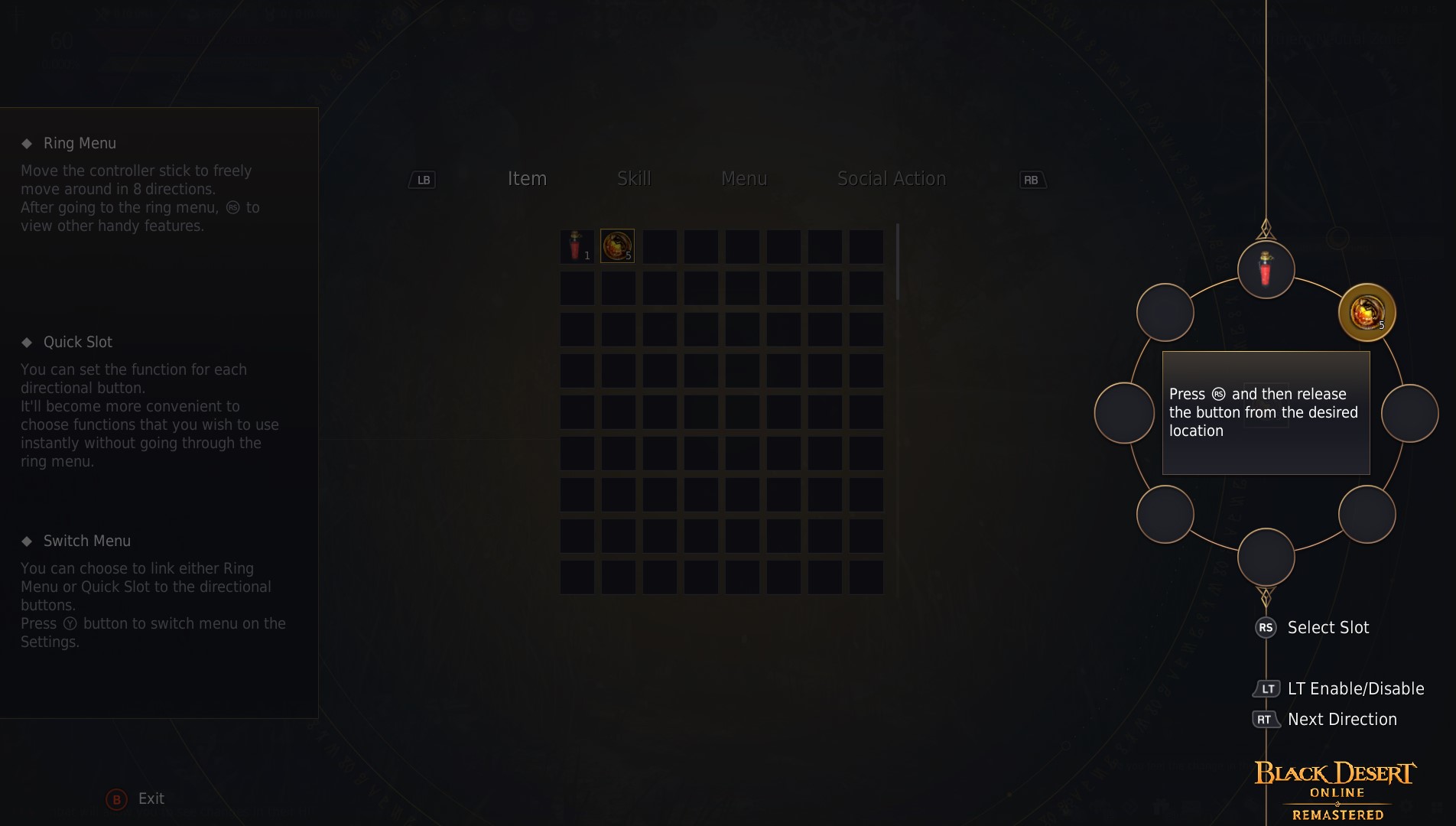 ▲ Setting Up the Ring Menu to easily use potions.

You can select potions from your item tab and use the analog stick to choose your desired Ring Menu slot. 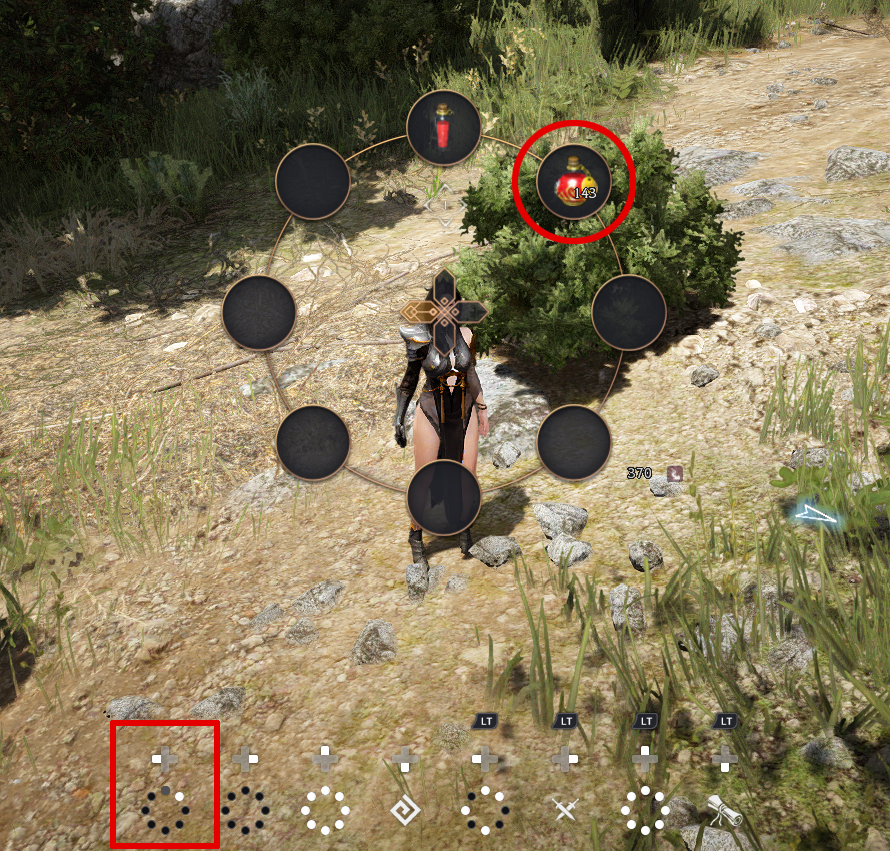 Techthon has never seen so many disgraceful controllers in his 30 years of expert blacksmithing! He wants to protect his fellow Heidelians from controllers that don’t vibrate and joysticks that don’t stick! Techthon encourages you to look carefully at the original manufacturer, and discover if they stand behind their product with a solid warranty. He admonishes you to keep an eye out for vendor return policies!

USB Controller Driver Basics
Controllers require driver software in order to communicate with your PC. Windows should automatically detect your USB controller and will automatically search for a driver and select the driver it thinks best matches. Sometimes this driver isn’t the right one, especially if you’re using a non-Microsoft controller. If your controller isn’t working after you plug it in, controller software is the most common reason. Check to see if the gamepad came with a software disk or instructions on where to download a driver. If there isn’t any help there, then search Google for the brand name, gamepad model, and the words “driver download.”

Checking Controller Drivers
You can see if Windows correctly recognized your device as a USB controller by typing “Device” into Cortana. Click on “Device Manager.”

Update, Disable, or Uninstall Controller Drivers
If you see anything that says “Unknown Device”, then it could be related to Windows not properly installing the controller driver. From here you can do many things to try and fix a bad driver. Try having Windows search for and update the controller driver first. If that doesn’t work, you will need to find a driver that will work with your gamepad.

Update Controller Driver
When you choose “Update Driver”, you have the option of manually installing a driver you obtained from the manufacturer or a third party. Or you can have Windows search the internet for you and decide which one is best.

Uninstall or Disable Controller Driver
Disabling or Uninstalling the device will require that you restart your computer. Then you can try plugging in the controller again to have Windows reinstall the controller’s software.

The video below gives a detailed look into how to use an Xbox 360 controller for sailing. Note: this video was made before the T+W+Q and mouse movement disablement updates detailed in the Sailing Guide.

Hey, thanks for the guide. I’m new to BDO and can’t figure out how to get the combo/move list that automatically displays to show with controller buttons. I kinda don’t think you can. I’d prefer to play without the UI on, can I just learn combos at my own pace? Or do you think I should enable the UI and try to use them as my char learns them?

Hello. I just bought a nintendo switch pro to play with my computer. Probably all consoles are similar, so hopefully you can help me here. I looked and looked online. I CANNOT figure out how to open the map, etc. I think there is a wheel in the game, but what part of the console do you push? I see you have something called a function key when I read your article but I don’t know what that is. I’ve tried all the buttons and combinations of buttons. I can’t find the answer anywhere. If you can help, I would… Read more »