Black Desert Online offers players the challenge of obtaining 3 T9 Dream Horses and 1 T10 Dream Horse, with the most powerful skills and highest stats. These rare horses have the best horse skills and stats. T9 horses can be purchased for about 12 billion silver on the Horse Market. Creating one of these beautiful horses yourself will take real persistance and a dash of luck.

Dream Horse stats are influenced by RNG. When a horse levels, there is a roll to see how much each stat will increase. This ranges from 0.1% to 1.3%. Getting perfect or bad rolls 29 times in a row would be very rare. We can assume the average is probably around 0.6%.

Dream Horse base stats show that Arduanatt is the clear winner in Speed and Acceleration. It would be easier to hit that 160.1% break point. Active travel, utilizing the right skills, makes each of the Dream Horses very close in speed. For AFK travel, Arduanatt is the best choice.

This shows the absolute best and worst Dream Horse stats possible at level 30.

Which Dream Horse is Best?

Arduanatt for Best in Mobility & Speed:

The best Dream Horse, if you only care about Speed, is gong to be Arduanatt. This Dream Hose is usually the best in overall mobility, with his flight/glide capability. Doing some cliff diving or mountain exploring? No worries here!

According to Patch Notes, Arduanatt’s DP is 150% higher than that of T8 horses. It’s a good amount of defense, but Dine has the best DP at 225% higher.

Arduanatt is the Dream Horse to use when you want the best AFK movement speed. All the horses are very similar in speed, when using the active travel skills Drift/Sprint + Instant Accel.

Arduanatt is terrible in the desert.

Dine is the best Dream Horse for players who spend most of their time at Valencia grind locations in the Great Desert. He’s as fast on sand, as he is on road. He is also able to use Drift/Sprint + Instant Accel in the desert. His desert resistance is an innate special ability and not tied to a skill. Any desert sickness en route? His healing capability will come in handy.

One thing to note: It can be difficult to use Drift/Sprint + Instant Accel combo in the desert because the slope of the dunes breaks it a lot. Dine is still much faster than a camel or elephant in the Great Desert.

Doom for Best in Offense

Doom is best for offensive combat and PVP. Some of the videos of his AOE fire attacks have been very impressive. I can also see his utility in grinding low level mobs to pick up Knowledge ranks. His low speed numbers are not a problem if you active travel with Drift/Sprint + Instant Accel. 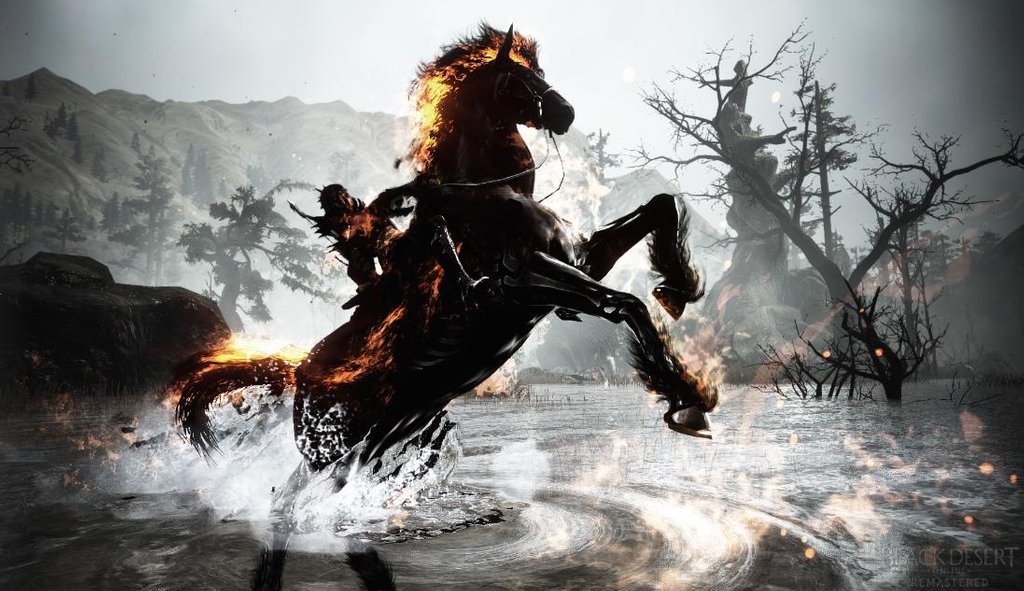 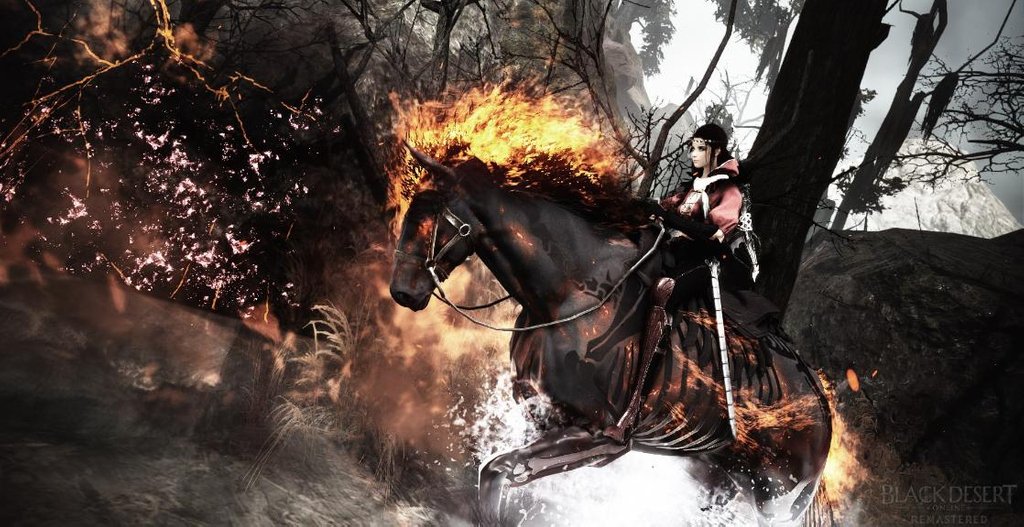 Items you will need:

All T9 Dream Horses start with 1 unique Dream Horse skill, Courser’s Spirit, and Double Jump. Other desirable skills have to be learned as the horse levels.

Mythical Arduanatt has 3 unique skills that are learned upon birth.

Dream hoses can also obtain most of the T1 through T8 horse skills. To see a complete list, click the link below:

Obtaining a Courser can get expensive both in time and money because Coursers have to have a specific line-up of skills.

If your horse has all required skills, its silver horse icon (as shown to the left) will turn gold.

Only a Courser can be Awakened. Another benefit of Courser is two mated Coursers will produce a foal that is guaranteed to have two skills when it is born instead of 1. This is good because regular horses can sometimes struggle to get even one skill per level.

When buying a level 30 Tier 8 to transform into a Courser, look for the ones that have at least 16 skills.

Every Tier of horse has its own requirements to become a Courser.

The Courser requirements for each Tier are:

The higher the Tier of horse, the more demanding the requirements are to make a Courser.

Once you have your Courser, you need to stable it at Stonetail Horse Ranch or Grana. You will have the option to perform “Courser Training”. This will bring up a menu with 3 Training options.

The goal is to make the total xp reach 200% (you can’t attempt an awakening otherwise) and it doesn’t matter what combination of Skill/Elegance/Strength you use to reach that number within the 180% limit for each. (But, keep in mind there is a penalty after a category reaches 100%. You get .5% per Training item, instead of 1% per Training item after the category reaches 100%.)

For example you could use:

A Courser’s Skill, Elegance, and Strength is gained by using Training items — each item giving 1% for its respective category, up to 100%. Then .5% per item from 100% to 180%. Each time you give an item to train your Courser, it increases the chances of obtaining a specific Dream Horse type. (Every item fed into a particular Training area will increase your likelihood of obtaining the associated Dream Horse by .5%)

Peridot Leaf is obtainable through Daily Quests in Kamasylvia. Please refer to the table below for details:

Breezy Conch Seaweed is obtained as an RNG drop during fishing. You can exchange certain junk fishing loot for them also.

Finally, once you’ve hit 200% in your Courser Training, you will need a

Your Chances of Awakening a Courser:
Failing is common, but each failure results in 1 Failstack. When you fail, you loose all your Training materials because Skill, Elegance, and Strength are reset to 0%. Your T8 horse will keep their level and skills.

If you spend 200 million silver on 100 Crons Stones, you can protect half of your training materials from being destroyed.

Awakening a Courser seems to be highly RNG. Some players report they are successful almost immediately and others say it takes 100 tries. The most common Failstack range I see from the forum is 15 to 35.

When you do finally succed, it’s not the end, because your Dream Horse will be level 1 and will loose all but the default Dream Horse skills. Depending on how lucky you are, you may have to spend more on Horse Skill Reset Coupons to get the best skills.

Buying a Dream Horse with Silver

You can purchase a Dream Horse for about 12 billion silver, depending upon their skills. Visit the Horse Market at the Stable Keeper.

Thank you to kmd d for the following video.

For more details, please click on the link to our guide below:

The following is a copy of the official lore according to the Doom Horse announcement page located here.

Doom. It is known as the roaring fire that blazes through battlefield. Yet, it was not always so praised.

Doom’s siblings, Diné of the forest and Arduanatt of the wind, were lauded for their beauty and powers. Yet not Doom, with its menacing coal-fire body. It had no wings to soar through the skies, or a mighty horn. Even worse, everywhere it went, it left behind a trail of fiery hoofprints.

Doom tried to suppress its inner fire, but fire continued to consume all around it. The only ones who could keep it company were its siblings, but while they had the chance to go out and be loved by the world for their powers, Doom doubled down on controlling its own power.

Afraid of harming others, Doom decided to exile itself. Every single day it spent on its own, it would pray only for one thing: that it could one day be around others without harming them, just like its siblings did.

Doom became increasingly lonely as time passed by during its exile. Knowing about the sadness in Doom’s heart, one day, Hadum, the God of Darkness, sought Doom out under disguise. He told Doom that others were waiting for him in the Land of the Dead.

Doom believed him. It wanted so desperately to believe that someone would want to seek it out. Therefore, Doom left its home for the first time and ventured into the unknown.

After traveling many leagues, Doom finally stood before the entrance of the Land of the Dead. Unsettling noises seeped from beyond, but Doom charged through without hesitation. It kept on galloping and galloping, passing through scenes of unimaginable agony.

There was something wrong. No matter how frantic its search was, Doom simply couldn’t hear anyone calling its name. In fact, everything was fading slowly fading to black, but as soon as the thought passed its mind, he suddenly realized it was a trap! There was no one there for Doom.

Doom tried to leave, but the gates of the Land of the Dead were firmly shut. Even after multiple attempts to ram the gates down, they would not budge. Doom had spent too much time trying to rein in its power that now, even when it was needed the most, it hesitated to draw upon its full strength. However, a thought crossed its mind as it looked around the infernal surroundings: There is no reason to not use its full powers here.

After that revelation, Doom gathered all its strength and charged at the gates a final time. With a thunderous explosion, the gates finally gave way.

Doom was free at last, and it had learned an unforgettable lesson: Power is not something to suppress, but to harness and control.

In fiery spirit and body, Doom returned from the Land of the Dead, ready to take on anything.

If i have already trained a courser and failed awakening a few times, then decide to awaken a diff horse, is the fs shared?

No, the FS stays with the horse

how much item does it need to dream horse ?
put the amount to please

“When buying a level 30 Tier 8 to transform into a Courser, look for the ones that have at least 16 skills.”
But once a horse is level 30, it can’t become a courser because it can’t learn new skills, or have I missed something?

You can just use appearance change ticked and horse can ger any non special skill with 30% chance
(it cannot get all S:Instant Accel / S:Sideways and both power strikes? so you will need to change other skill for these)

Hi, what are the right controls and animation reduces for doom horse pvp?

I currently have 11 fsm. what is the probability of success as a percentage ?

The reason it fails is purely RNG, increasing one stat over the other only increases the chances of getting one horse over another, do note that even if you do go above 100% , chances are that you still might get a horse where you have a lower % . I had 130% on Doom and ended up with a Pegasus that had 56% .

Important question – Ive made a mistake of buying any t8 pure white in the market. it has 13 skills only as oppose to what was suggested above(at least 16 skills). Now Ive made it a courser spending 26 skill change coupon(from attendance and pearl shop). My question is, is it still advisable to awaken my t8 courser? knowing that it only has 13 skills? my friend says its ok since it will be reborn eventually. but another thing I am more concern about is that I might get a harder time in awakening my t8 courser because she only… Read more »

it doesn’t matter for t9, in t9 u level up again and learn skills again

I can confirm that I got a Pegasus on a T8 Courser with 13 skills. Took me 19 failstacks.