BDO Simplified Main Quest is an optional quest line to quickly complete much of the main quest line. It allows us to do this by completing a series of quests in which we must reach specific levels. Levels can be obtained normally or via Fughar’s Timepiece. (Normal leveling is done via grinding or questing with a Chenga Tome.)

The Simplified Main Quest Line is a great benefit to veteran players who have Season Characters.

In order to have the option to accept the Simplified Main Quest, your alternate or main character must have completed the main Mediah quest line already.

View your progress by pressing O key then Main tab.

The Simplified Main Quest line starts after you enter Velia and have completed the quest, “Sage of Velia” given by Hans, the guard stationed at the road into Velia.

After completing this quest by speaking to Alustin, you will get a pop up window like a Crossroad Quest.

Important: If a pop up window does NOT appear at this time, DO NOT go any furthur in the Balenos or Serendia questlines and open a support ticket!!!! (My friend found this out the hard way.)

NOTE: This skips (and completes) Balenos, Serendia, Calpheon, and Mediah main quests lines! Don’t choose this if you like to quest!

You will NOT be able to pickup up at a later time Serendia, Calpheon, or Mediah main questlines if you accept the simplified questline!

If you have already completed the Balenos Main Questline and finished ”The Mouth and Hand of the Alchemist” quest, you CAN’T accept the Simplified questline.

If this has happened to you, you can delete your Season Character and start over to obtain the Simplified Main Questline option. (Support can’t undo quests you’ve already done.)

Last Season’s inventory after completing all of the Simplified Quest Line.

Here is a detailed list of the rewards for each level obtained.

When you choose the Simplified Main Quest Line, you don’t have to worry about gear.

A full set of Naru Gear and enough Beginner Black Stones to enhance it to PEN is awarded to you by level 55.

Keep the Naru Gear and enhance it to PEN so that you can do Naru Gear Exchange for PRI Tuvala.

Your old main quest line gear can be transfered to your Season Character.

It can be worn immediately by a level 1 Season Character, if you have already done the main quest on a different character.

You can use these weapons, if you have an old box for them in storage, but the chances of that are slim, since they reworked some to give the weapons insead of boxes.

NOTE: you will not be able to use an Awakening Box, if the class Awakening hasn’t been released yet.

Please kindly note that the Simplified Questline will be available to any Adventurers that have completed the quest: [Pet] Bareeds’ Junaid and the entire Mediah main questline — the last quest of the Mediah quest chain should be Apocalyptic Prophecy, which both of the quests could be accepted at the NPC Bareeds lll.

And to accept this simplified quest, adventurers must not have accepted/completed the quest: The Mouth and Hand of the Alchemist and/or Embarking on an Adventure, which are a part of Balenos questline.

Question:
Can I go back to the normal main questline by forfeiting the simplified questline?

– Once your season character reaches Velia through the main questline and completes the quest “The Sage of Velia”, go to Alustin in Velia to start the simplified questline by accepting the quest “[Special Growth] Birth of a Prestigious Family.”

– You will not be able to proceed with the Serendia, Calpheon, and Mediah main questlines upon accepting this quest. Instead, Adventurers will be able to level freely and receive rewards for reaching certain levels.

– The last quest of the simplified questline, “[Season] Fughar’s Memorandum – Chapter 11”, will make the character have fulfilled the same prerequisites of a character who has completed the Mediah main questline and allow them to start the Valencia questline.

– Additionally, when progressing through each of the quests, the character will get inventory expansion quests and certain regular quests.

– If you selected the simplified questline by accepting the quest “[Special Growth] Birth of a Prestigious Family” from the NPC Alustin, you can complete the objectives on the Season Pass by talking to Black Spirit (/) after completing each of Fughar’s Memorandum.

* You cannot accept the previous main questline if you selected the simplified questline on the Select Quest window. 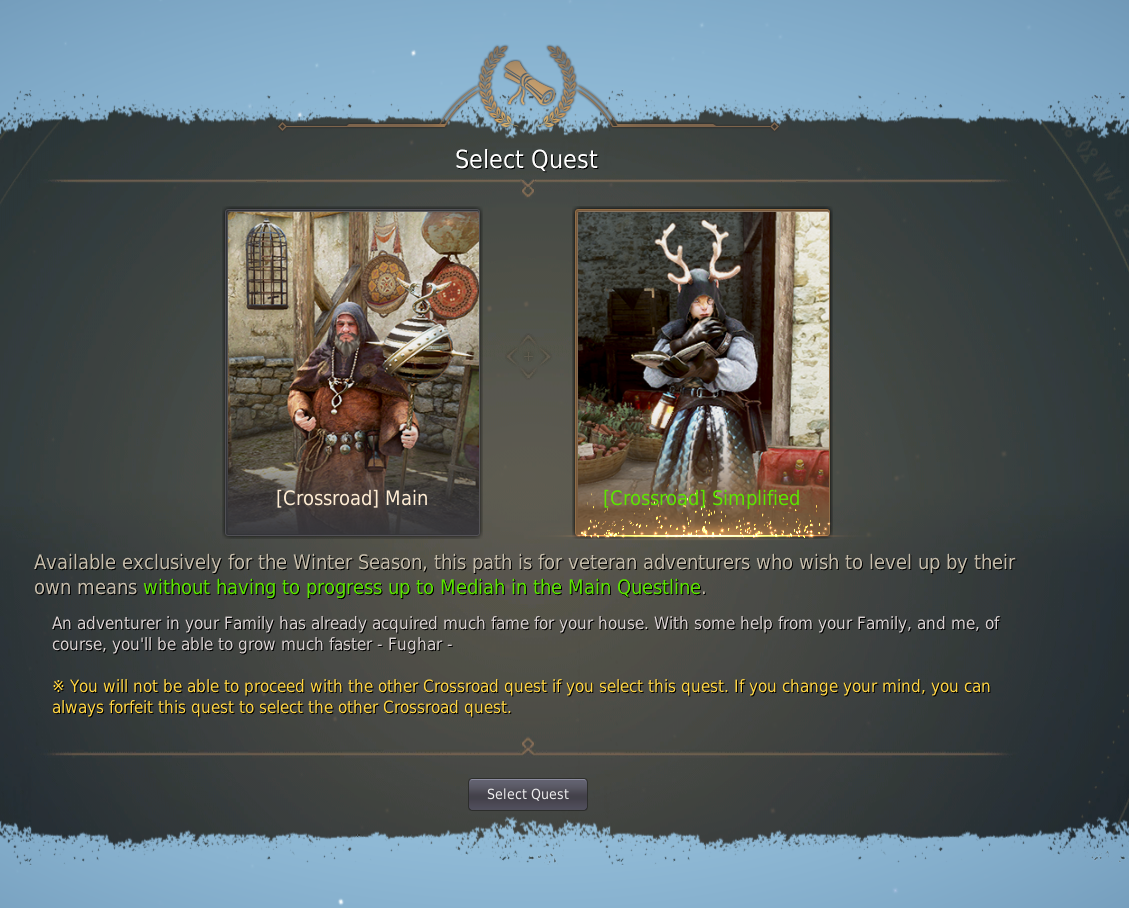 Hello, I used my timepiece on another character and wanted to do the simplified main questline but there is no popup window when I reach Velia.

I’ve already completed quest line up to Odyllita on my main and was able to do the simplified questline on my first seasonal character. Don’t know if I messed up by doing the quest line until reaching Velia and talking to Hans (did not accept the “The Sage of Velia” questline). Can you give me some help by any chance? 🙁

Hello 🙂 The patch notes stated that the simplified main quest line was changed to allow any Season Character to complete it. This may be a dumb question, but did you make sure you were on a Season Character and on a Season Server, and also that the character that did the O’dylitta line also did the free pet quest from Bareeds? If all else fails, try contacting support.

Yes I was on a seasonal character on a seasonal server. I also checked the Bareed’s Junaid quest and it is already completed. I submitted a support ticket yesterday and I got a response today from one of the GMs. Basically I only had to accept the “The Sage of Velia” quest from Hans and complete it at Alustin, after that the Crossroads popup appeared immediately! 😀 There is a paragraph on the “Simplified Main Quest Start” in this article with an attention note saying that “If you have already completed the Balenos Main Questline and finished ”The Sage of… Read more »

On console you still have to get the quest after Sage of Velia. The crossroad quest doesn’t pop until then. Can confirm.

I can’t get knowledge from NPC Sarma Anin

Hello, do you know if we use simplified main quest, it will count as quest done (for 30K logbook)?